2- It’s never too early or too late, everything happens when it is supposed to happen

9- Love more, even the cats on the streets and the dead spider in the corner being eaten up by fire ants, and the fire ants. The more love you send into the world the more it resonates within your soul.

11- Stop overreacting (No promises though)

12- Expect a pleasant surprise at any given moment.

14- Don’t be embarrassed to say no

19- Your bones are not made of glass.

20- Swallow your foolish pride once in a while.

This is a personal post, if you’re looking for world events please refer to your nearest news website.

I know they year isn’t over yet, but I decided to do an early inventory.

So, if my life was a drama series, 2013 would be one season that ended with too many cliffhangers. Many issues I’m still waiting to resolve or maybe just convincing myself there’s still something to do about them and it’s not final yet.

I wish I could say I had a more productive year, but I’ve cocooned inside my bubble for a large part of it. I did visit a new place, visited Marrakech in April, met some new and interesting people there and had the chance to catch up with some friends and other interesting people I’ve met before. The day I traveled back to Jordan was the most exhausted I’ve felt in my life so far, that’s a record I’m not eager to break, but for some reason I remember it fondly.

I paid off my car loan! And I hope I will never need another loan of any kind.

Met some great new friends and deepened my relationships with others.

I changed, for once I swallowed my pride and went for something I wanted, regardless of the fact that I hit a brick wall, the point is that I did it. Now I’m not sure if I regret it or not, but it was a good leap nonetheless.

I wrote a book and then decided not to publish it. But it was a good experience, it was like a writing exercise, and I’m not sorry about anything. Now I want to write something else, something new. Actually when I looked at the book I wrote after I wrote it, I felt like I didn’t like it, wasn’t sure what message it would convey to people. Hence, discarded.

The best day of the year was July 2, spent at the Dead sea Lagoon with the family.

Read some good books. Here are some of the parts that stuck with me: 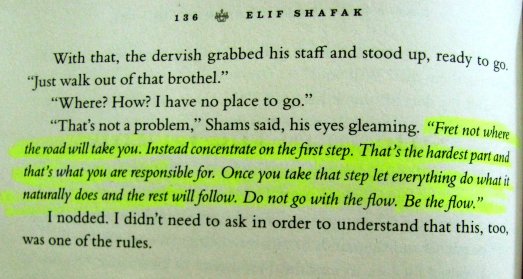 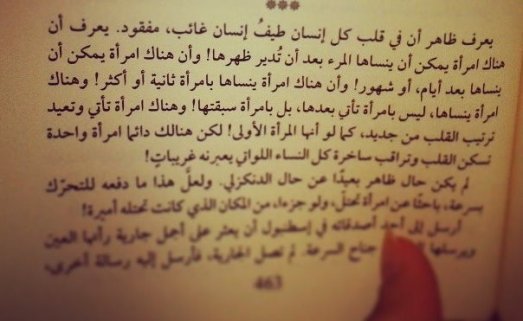 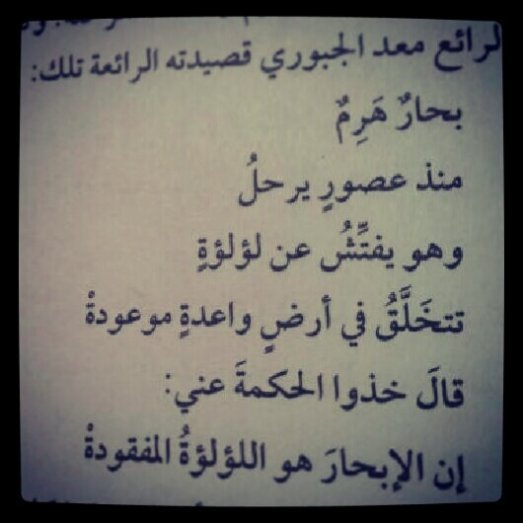 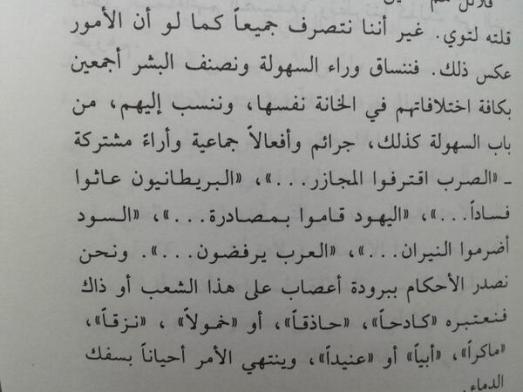 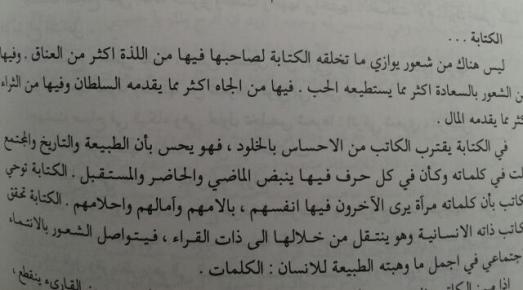 I’ve been avoiding driving long distances since the snow storm. Yesterday however I was dragged out by good friends to meet and discuss a project somewhere in Jabal Amman.

With reinforcement against what’s supposed to be the beginning of winter (Yes, turns out astronomically what we saw last week wasn’t winter, it was the just trailer) I set out at around 5:30 from my home since we agreed to meet at 6. Usually this would be early as it normally takes 15 minutes to get to Rainbow street from where I live, 20 with some traffic. But what I saw on the roads yesterday wasn’t traffic, it was a country-wide fire drill.

As I was stuck on the uphill climb leading to Abdoun my eyes roamed the roadside looking for the snow that was jamming the roads, but there was nothing. Just cars inching forward like old tortoises.

But to tell you the truth, I don’t know which was worse: the traffic or the radio stations. I mean, from an annoying, nerve-provoking talk to a horrible rendition of “Goodbye My Lover”, and then Abu Wadee3 poped out of nowehere saying “Lissa eddunya bkhair”… Lissa eddunya bkhair, ya 7abibi!

Anyway, I reached my destination, which was thankfully and surprisingly not  crowded at all and I parked quickly. While I was there I ran into John, founder of Project Pen with whom I worked last year before I left the project as a permanent member for lack of time and nerves.

So, we talked about Pen and he looked as excited as ever. I couldn’t help but say: “I admire how you can keep being excited about something for such a long time.”

And then on the way home I thought about that, and I thought about the way my life has been shaping to be. You know, I realized recently that I don’t have a big goal in life, no one big project. One day I’m giving lectures at schools about exra-curricular stuff, the other I’m traveling to some conference somewhere, and then I’m writing a book. It feels funny when people give me advice I should follow if I want to be a big novelist, while I never thought about becoming a big shot novelist. I write because I feel like it. And yes, I do like to write more books, it’s just not a goal in itself anymore. For me, it’s all about the small projects.

And I like it this way, which I’ve come to discover. After all it’s nice to look back on your life someday and see a collage of colors, dozens of faces and to know that you’ve done lots of things, experienced a lot of things, lived a lot of things.

I guess I don’t take life as seriously as most people do, just seriously enough for me.

Is this the right way to go? I don’t know. After all, is there such a thing? 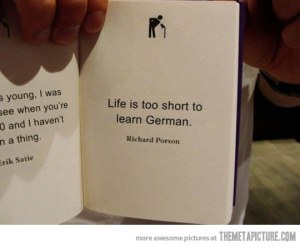 This is not a post about German language actually. I mean it’s funny how everyone is hounding it these days but to think of it, it seems like the Germans asked for it when they came up with this dialect-turned-language. Nothing against it, but I can’ for the life of me understand how they got the courage to write poetry and delicate literature with it. No wonder people committed suicide because of a Goethe’s Sorrows of Young Werther. I mean it’s bad enough the novel was tragic, this only adds to the tragedy of it.

Anyway, this isn’t about German nonetheless. Actually these posts got me thinking. “Life is too short” is one of the most used and abused phrases of this age. I mean just thinking that it’s almost 2014 when World Cup 2010 feels like yesterday, it makes perfect sense. A little scary actually.

And it makes me wonder about all the things we squeeze into our lives, the things that take up unnecessary space, while we push out the things that matter. I wonder if one day I’d look back at my life and regret not realizing how short it was to be afraid of anything. This all looks like a cliché but what I’m actually trying to do is this, quite literally:

In the course of years during which I’ve been blogging, I’ve written a number of short stories, English short stories. Those stories have a special place in my heart and I’ve always felt it was wrong to have them buried in the blog archives and wanted to bring them back to the surface again. I thought of publishing them, in print, but then I’ve ever been fond of the idea of publishing an English book in an Arab country. So, after some search  and asking around I decided to go with e-publishing, putting those stories in an e-book and offering it for free.

You can download it here in several formats [click on the picture to go to the book page]:

You can also check its page on Goodreads: https://www.goodreads.com/book/show/19375988-small-lives

Have I told you about the black bird?

It happened a couple of times. I would wake up to the sound of rustling leaves in the garden, actually one of the things I love about the new house is that my room overlooks a “batch” of garden with a vine and a seasonal tree. So, I would hear the sound of the falling tree leaves, all golden and crunchy on the ground, and I’d get up to see what’s out there. I’ve always been fascinated with the animal world so something inside me would be hoping that it would be some strange animal, more than just an average cat or a pigeon. It’s good to have expectations, as long as they are not from people, and those expectations I had those mornings weren’t always met with disappointment. As I rose from bed I saw a black bird jumping swiftly between the leaves, but as soon as I appeared in the window frame it would fly away, I only got a glimpse of it.

For some reason I like to think it was more than just a bird.

The other day I heard a more violent rustling sound outside, it was in the late afternoon. When I looked out of the window I immediately called out to my mother: Come and take a look at this strange bird out there! It was some sort of a fowl but we couldn’t really work out what kind it was. I remember seeing something like it in the zoo. It kept walking back and forth in the garden until it finally ran out into the street.

Yesterday I heard an even more violent sound outside.

Nah, it was just a cat that’s been sleeping on our porch and hanging around during the day. It had climbed the tree and was ready to jump, which she did with quite the skill. Not a total waste of time,  that was a nice sight.

Check out my books

I was born... then things got complicated

Previously on the Cinnamon Zone…